Listen to Nina Serrano and Rick Lupert on OZCAT Radio. 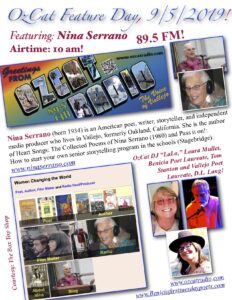 Born in 1934 in New York City in the middle of the great depression, Nina Serrano learned that hard times are struggle times when people have to come together and help each other. She grew up in Latino and other immigrant communities with their deep personal and cultural connections. These roots inspire her creative work about women and Latino-American culture to portray characters seeking their own path to change and creative fulfillment through activism for social justice.

Nina’s journey to a life as a writer went through many artistic phases, including theater training, studying anthropology at the University of Wisconsin, international travel to forbidden Soviet Russia and revolutionary China during the Cold War of the 1950s with student peace groups. While raising a family, and teaching, Nina has worked in theater, radio, and film. She helped make movies about Fidel Castro’s Cuba, about Salvador Allende’s Chile and Sandinista Nicaragua. In Cuba, she met Salvadorean exiled poet Roque Dalton and they co-authored a TV drama about the folkloric Dalton Gang and saw it produced on Cuban television. This instantly made her a writer. Nina’s writing, poetry and radio broadcasts express the inspiration gained in her support for human rights, peace and social justice, within the Latino-American culture and traditions over the decades and across the continents.

Living in California since the early 1960’s, she has been awarded international prizes for her books of poetry and films. Heart Strong, volume 3 of her poetry trilogy, won a 2015 PEN Oakland Award. Heart’s Journey, volume 2, won The International Embassy Award in 2012. She was voted “best local poet” by Oakland Magazine in 2010.

For her work on the film, “Que Hacer/What is to be Done,” a drama/documentary set in Chile, she won the best director award at Venice, Italy International Film Festival. She won the Kravov, Poland Film Festival award for “After the Earthquake/ Despues del Terremoto,” a drama about Central American immigrants and exiles. Her video “Back From Nicaragua,” a documentary about the concert tours of Pete Seeger, Joan Baez, Holly Near and the Looters was aired on 27 PBS stations.

Her produced plays include The Chicken Made of Rags, a children’s Caribbean folktale musical play and CD; “The Story of Ethel and Julius Rosenberg,” a docu-drama based on the famous 1950’s “Atomic spy case;” and, “Weavings,” a dance/drama intertwining the stories of two women in the underground resistance in Nazi-occupied Holland and the military dictatorship in Chile.

The Rosenberg play, last produced in the late 70’s, was revived by high school students in Bryan, Texas, in 2016 just as she believed her life in theater had ended.

At age 82, she has published her first historical romance novel, Nicaragua Way, a story set in the 1970s and 80s during the Sandinista revolution and the San Francsico barrio’s support movement. Her creative work has always aimed to inspire change, to be courageous, and to love more deeply. Nina Serrano believes it is never too late to change.

Nina says, follow your dreams because a better world is possible, and everyone can do something to make it happen.

Rick Lupert has been involved with poetry in Los Angeles since 1990. He is the recipient of the 2017 Ted Slade Award, and the 2014 Beyond Baroque Literary Arts Center Distinguished Service Award, a 3 time Pushcart Prize Nominee, and a Best of the Net nominee. He served as a co-director of the Valley Contemporary Poets for 2 years, and created Poetry Super Highway. Rick hosted the weekly Cobalt Cafe reading for almost 21 years. His spoken word album “Rick Lupert Live and Dead” featured 25 studio and live tracks. He’s authored 23 collections of poetry, including “Hunka Hunka Howdee!” and “God Wrestler” (Rothco Press) and edited the anthologies “A Poet’s Siddur”, “Ekphrastia Gone Wild”, “A Poet’s Haggadah” and the noir anthology “The Night Goes on All Night. He also writes and draws (with Brendan Constantine) the daily web comic “Cat and Banana” and writes the poetry column “From the Lupertverse” for JewishJournal.com. He has been lucky enough to read his poetry all over the world.